Governments around the world plan to encumber their societies with further twists to the failed tax policies that constrain their economies. Outcome: exit from the Corvid-19 pandemic will further reduce productivity. The land-driven boom is on course for the bust when house prices peak in 2026. Post-pandemic reactions in the markets will aggravate the trend. Investors will minimise risk by placing money in rent-generating assets rather than job-creating enterprises. People who suffered most from the virus will endure downward pressure on incomes. And the global trading system enters a hazardous future.

It need not be this way. But to restart their economies, economists in national treasuries lack the imagination to adopt strategies that are proportionate to the challenges now faced by rich and poor nations alike. Armed with blind faith, they will rely on worn-out theories to try and combat the fallout from the horrendous sovereign debts that have piled up. Trillions of dollars were spent to soften the impact of lock-downs. None of the options can steer economies onto a path of sustained growth.

Whichever way they proceed, governments will fail to elevate productivity or create the resilience needed to overcome the weaknesses that were exposed by the coronavirus disaster. Fractures in society were exposed in painful of ways. The mortal costs were endured disproportionately by low-income communities, and old folk in care homes. In the UK, the death rate was twice as high in the most deprived areas – mainly located in the “rust-belt” towns of northern England – compared to the least deprived areas (Figure 1).[i]

Governments ought to invest more in public services and infrastructure. Funds would not be available under existing revenue policies. Take the case of education in the US. The Brookings Institution estimates that the future earnings of students will be reduced by $2.5 trillion, thanks to the loss of four months of education. That is equal to more than 12.7 percent of annual GDP.[ii] The US government will not be able to fund improvements to education to claw back those losses. Instead, the US – and, indeed, all governments – will head for the enormous losses that will come with the slump of 2028.

My prediction that the global economy will crash at the end of the current 18-year cycle is challenged by those who fear the prospect of a depression.

I maintain that the cycle that began in 2010 will continue through to 2028. However, consider the possibility that the pandemic did inflict sufficient violence to disrupt the cycle that shaped capitalist economies of the past three centuries. What does history tell us about the consequences?

The closest exemplar is World War 1 and its aftermath: the Spanish flu, a pandemic which killed untold millions of people. What followed? The US enjoyed the Roaring Twenties, with Flappers and jazz and all that! The new cycle began in 1920, and the mid-cycle downturn arrived with the Wall Street Crash of ’29. Like clockwork, nine years after the pandemic! If the same pattern occurs after Corvid-19, get ready for bouts of reckless land speculation (useless Florida sand dunes were sold for millions of dollars in 1925!), and a crash in 2028.

Either way, then, we can expect an economic reckoning at the end of this decade. But with western governments suffering from policy paralysis, we can also expect a more intensified conflict among nations. A taste of things to come has emerged on the cyber warfare front.

In the UK, the pandemic turmoil was associated with the hacking of banks and the power network.[iii]  Such threats will intensify as nations feel the impact of the enormous increase in debt trigger by their virus survival strategies. China will be a winner: the Financial Times assembled the data (Figure 2). Governments in hock to China will discover that the credit from the Asian giant came with many non-financial strings… 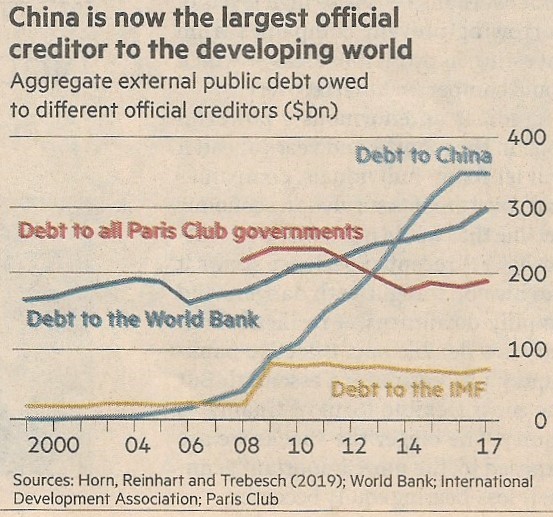 According to Bank of England Governor Andrew Bailey the UK economy will bounce back in a rapid “V” shaped recovery.[iv] Perhaps. But the Johnson administration is saddled with hundreds of billions of pounds in sovereign debt and a dysfunctional monetary policy.

The only way to realign the economy and build resilience into communities is to initiate a comprehensive plan for restructuring the state’s finances on terms that would maximise efficiency in the markets. That means the graduated reduction in revenue from Income Tax, VAT and the burdens on enterprises; drawing revenue from the nation’s rents.

That plan of action, correctly explained, would attract cross-party support in Parliament, and would secure popular consent based on a democratic mandate for change.

But according to Nick Macpherson, HM Treasury’s former chief economist who served as Permanent Secretary there for 10 years, the rational revenue raiser will not be countenanced by the boffins in the Treasury. Now a Lord, having been elevated to Parliament’s Upper House after retiring in 2016, Macpherson reveals that, when he raised the prospect of shifting to a revenue based on the rent of land, he was looked upon as if he was insane.

“It worries me…that we don’t have a land tax. In a sane world, we would have a proper land tax. Sadly the only person to try it was Lloyd George and he ended up having to pay every single penny back.”[v]

Macpherson made his disclosure at a Resolution Foundation seminar on October 24, 2018.

The sane course would have been for the Treasury to adopt his advice. To do so now, however, means side-stepping the mandarins in HM Treasury. They hold government policy, and the public’s welfare, hostage to their ill fortunes.

Fred Harrison and his associates offer unique insights that identify how the 21st century's crises can be overcome. Read their articles here.