The Experts are almost unanimous is asserting that Britain will suffer once the Brexit deal has been struck with the European Union. Fear is the overriding emotion of those who want to reverse the 2016 referendum, in which people exercised their democratic right to redefine the future of their country. The psychology which frames the Brexit negotiations is calculated to deliver a bad outcome for both the UK and the EU. To transform the new relationship into one that delivers mutual benefits, Britain needs to scope out a plan that would guarantee prosperity for the UK, including an open economy that welcomes European engagement.

Three pathways to progress are now open to Britain. If combined, they would transform the current malaise that afflicts that section of the population that endorses the “populist” rejection of mainstream politics. The possibilities include

First, consider some of the policies and strategies which follow emancipation from the rules and regulations enforced by Brussels.

Next, consider the policies and strategies which are possible within the current socio-economic paradigm, irrespective of whether the UK remained within the EU or not. Of these, the single most important one involves the financial sector.

The EU is determined to obstruct the reach of the City of London across Europe. That will work to the UK’s benefit. At present, the British economy is seriously compromised by the top-heavy service sector. The financial industry operates as a burden on the sectors that create the most jobs and could add enormous value to the nation’s wealth. By diminishing the influence of bankers, and encouraging the emergence of regional financial institutions designed to support small- to medium-sized businesses, productivity would rise in leaps and bounds. 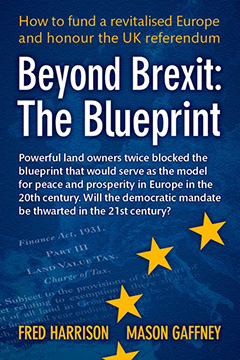 The final group of policies and strategies are those that are not confined within the current socio-economic paradigm. Of these, the most important is the complete overhaul of the fiscal system. Economists know that the current way of funding the state, and the public’s social services, creates enormous deadweight losses. But government, HM Treasury and think-tank economists refuse to draw people’s attention to the scale of those losses. These have most recently been analysed in Debt Death and Deadweight. By creating a popular mandate behind the demand for a fiscal overhaul, the UK would end up growing at a pace that far eclipsed the rate that would result from being a member of the European Union.

Cumulatively, these policies and strategies would transform Britain beyond recognition.

Westminster would devolve more powers to the levels where they would be most effectively implemented. Central government’s functions would automatically adjust to ensure maximum personal freedom, while enhancing the social solidarity that unites the four nations of the British Isles. An ethics-based formula for sharing the net income – the rents produced by all four countries – would organically rebalance personal relationships while ensuring prosperity for those who chose to live in the regions farthest from the metropolitan centres.

The UK’s approach to the EU, and to the rest of the world, would be driven by the fusion of a responsible kind of statecraft that was graciously laced with respect for the rights of others. We may reasonably assume that the spirit of a new kind of United Kingdom would become infectious, tending to enrich the global institutions which are now being branded by President Donald Trump as alien intrusions in domestic affairs.

This is a project based on can-do realism. The Experts who are spreading fear in the United Kingdom refuse to weigh the benefits of these possibilities. Their minds are cocooned within echo chambers that tell them what they want to hear.

For the sake of their children, the peoples of the British Isles need to listen to alternative voices. Once upon a time, the folk of these islands led the world. They can do it again.

Dead on Target: Metrics Fit for a Golden Age
Why ‘money down the drain’ is really money in your pocket!

Fred Harrison and his associates offer unique insights that identify how the 21st century's crises can be overcome. Read their articles here.